Chris Evans has 30 years experience as a licensed attorney specializing in corporate and SEC law. Previously, he was the Program Director for the Office of the Governor, Dept. Of Community Affairs in Texas, and has served as general counsel to a publicly traded electronics and aerospace contractor. During his position as Associate Attorney his focus was on corporate clients until he co-founded and managed a full service real estate development company. Mr. Evans earned his Juris Doctor Degree at the Tulane University School of Law in 1981, received his M.A. at the University of Texas at Austin Texas (Public Affairs, 1975), and his B.A.(Political Science) at Tulane University, New Orleans, Louisiana in 1971. Mr. Evans was partners in a law firm for three years in Washington, D.C. His focus was litigations and claims before the federal courts and agency boards of contract appeals. Since 1993, Mr. Evans has had his law firm in Annandale, Virginia. His practice focuses upon corporate finance, compliance with securities regulations, business acquisitions, and federal tax matters.

Quality Technology Inside
Made in the USA 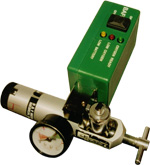 Endorsed by the
American Academy
Of Balance Medicine

Thank you for visiting Ingen-Tech.com